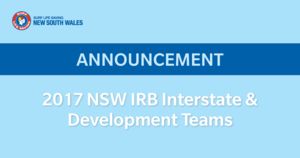 There’s no question that speed will be the aim of the game when NSW surf lifesavers takes to the ocean at the Interstate Inflatable Rescue Boat (IRB) Championships at Cudgen Headland SLSC next month.

A total of 35 athletes have been announced to don the blue cap in the annual event after impressive racing throughout the NSW IRB Premiership Series which concludes at Cape Hawke SLSC this weekend for the final round.

The 18 strong NSW Interstate Team will be racing to spoil their northern rivals’ dominance with the Queenslanders having enjoyed plenty of success over the last few seasons.

Reigning NSW IRB champions and current Premiership leaders Kiama Downs have been rewarded for their consistency with 10 of the 18 selected athletes hailing from the South Coast club, while Caves Beach, North Cronulla and Catherine Hill Bay will also be represented.

Thanks to NSW hosting the competition for a second straight year, the state will also be fielding a Development team boasting some of the best young and up and coming IRB competitors in Australia.

This group of 17 will have the opportunity to test their skills against the best in the country however; their results don’t contribute to the final pointscore.

Kiama Downs stalwarts Nathan Foster and Steven Guy will lead the Interstate Team in this campaign as Head Coach and Team Manager respectively while Thirroul’s Steve Robson and Ken Sellers from The Entrance will be guiding the Development Team.

“We’re expecting NSW to turn in a fantastic performance at the IRB Interstate Championships. There’s a great mix of experience in the Interstate Team and we think this is the right formula for us to achieve success,” Rob Pidgeon said.

“It’s great to have Cudgen Headland hosting this year and is a major plus to be able to select a development team not just for the respective surf lifesavers but also for the sport of IRB racing.”

The 2017 IRB Interstate Championships will be held at Cudgen Headland SLSC on Friday 14 July, which will be followed by the Australian IRB Championships on 15 and 16 July.